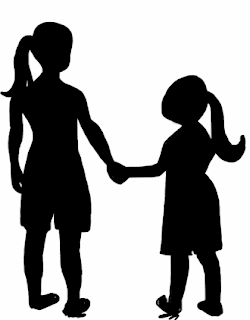 My cousin, Ella, is twelve. She watches me as I take off my dress at the pool and comments on my striped bikini, adjusting the straps of her own bathing suit and asking me how old I was when I started texting boys. I tell her, when I was her age, I didn’t have a cell phone. We had something crazy called instant messenger to talk to our friends and read the away messages of the boys we thought were cute. Later that night, she lays with her head on my stomach and runs through another list of questions, promising that each one is the last, but then finding another moment of confusion within each of my answers.

I try to remember the things that I needed to hear when I was twelve, or that I would have liked to have known. Be patient; when you are older you will find a wonderful guy, but you’ll probably meet a lot of a-holes on the way; focus on what you want and don’t worry about what boys think of you; be a strong and independent girl…I try to think of answers that won’t scare her, but at the same time don’t give her false hope or senseless reinforcement to the idea that everything always works out in life and there is nothing to worry about. I find, it is a difficult balance. I don’t know exactly what these answers are, but I think maybe all she needs is just to have a chance to talk and to ask and to connect with someone who remembers what it feels like to be lost in a changing world and uncomfortable in a changing body.

At twelve years old, she is discovering the unfriendly nature of growing up that has her running to the bathroom in half hour increments, and glancing at every mirror we pass as we walk through stores in the mall. Aquina and I dress up in fancy hats and scarves, talking to each other in British accents as we run around the spiral racks at Claire’s, picking up anything that sparkles and trying to use it to decorate Ella. I put a silver flower clip in her hair. She takes it out. Turns it over and over in her hand. Puts it back in her hair. Takes it out. Puts it back in her hair as she walks over to the mirror. Takes it out. I tell her not to worry because she looks beautiful, but she cannot get past herself today.

When she unpacks her suitcase and shows me her new bras, I try to act excited. I try to pretend like growing up is fun and exciting, hoping I can convince her more than I am able to convince myself. I don’t tell her that when I was twelve, I cried every night for a month after learning about how my body was going to change.  Or that I wore my womanhood as if it was a deformity I was desperate to conceal, layering on five or six sports bras beneath a double set of t-shirts every day; that I prayed over and over, pleading with God to not make me get my period, writing letters to Santa asking if he could turn me into a boy in exchange for being good all year, and hiding each new hair, each new bud of growth with desperate hatred.

As I lie in bed tonight, I can’t stop thinking about twelve. As much as I hated every single moment of maturity, I loved being twelve. I was still like seven-year-old Aquina when I was twelve. I ran around and got dirty and loved loved loved beating my male classmates at every sport. I wore fluorescent knee-high socks during basketball games. I put a girl in a headlock for telling people not to talk to me because I was a really a boy. I put a boy in a headlock for calling me a girl. I succeeded in changing the dress code for band recitals, so that I could wear my brother’s suit instead of a skirt. I wrote a six-page petition to my gym teacher when he separated the boys from the girls during class, complete with a charted recording of the difference in average time allowed to play (9 minutes each round the boys played compared to only 4.5 minutes per round for the girls), as well as the signatures of every student in my grade. I refused to wear makeup. I refused to shave my legs. I refused to be like everyone else. I loved everyone and I laughed at everything and I knew that I could do anything I wanted to.

Two years later, I would begin my first relationship, and within a year after that, I would watch as my childhood was stripped away from me, stealing with it the pure innocence and naivety I was unaware anyone could touch. Fifteen doesn’t sound that young. Sixteen, seemed so old at the time. But when I look at Ella, with her baby face and training bra, still throwing tantrums when her mom makes her go to bed at 9:30, still fighting with her little sister about who gets to sit in the middle seat and who gets to push the button to call for the elevator; all I can see is beautiful baby. A little girl. A child. And I can finally recognize how young my own face looked, in the darkness of my pale pink room, lying on sheets that had pictures of troll dolls on them after picking myself up from the crumpled pile of dirty t-shirts on my floor and trying to make sense of something to which I hadn’t yet learned the word.

Letter to my abuser

My message to anyone who is in love with an a...

Search Life After Dating A Psycho:

Think You Don’t Know Anyone Who Has Been A Victim of Abuse?

"According to a recent survey conducted by Liz Claiborne Inc. and the Family Violence Prevention Fund, nearly 1 in 3 teenagers who have been in a relationship report actual sexual abuse, physical abuse, or threats of physical abuse."
Even if you're not aware of it, chances are someone you know has been a victim.